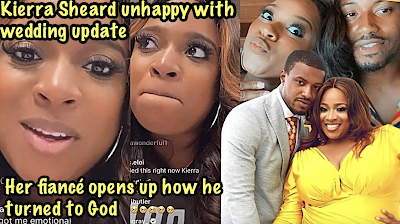 A few weeks ago I did a video about fans calling gospel singers Jekalyn Carr and Kierra Sheard new men hood and tatted up.  And I personally don't have a problem with men who are hood or who have tattooes that are in the church, but I don't know how y'all are going to feel about this video I am about to show you.

Also, Kierra Sheard originally was making wedding plans next year for May 2021.  However, this is what she had to say about their wedding plans

As we continue to get to know Jordan Kelly more and more, it's only natural that he would want to share his struggles and where he came from.  So, he's basically giving his testimony in this live video by saying he used to drink, smoke, and party, but he lost his job at Quicken Loans and started to go to church.

Kierra Sheard admits that she has known Jordan Kelly since they were younger.  He went off to school, Kierra was working on her career, but years later when Jordan return home and lost his job, he started attending church more and Kierra admits that this is when she started to notice Jordan and pick up on his vibes.

My Marriage Is My Testimony To Help You

How To Be A Good Wife To Your Husband

Read About My Personal Marriage Testimony

Encouragment For Wives From Lori Schumaker