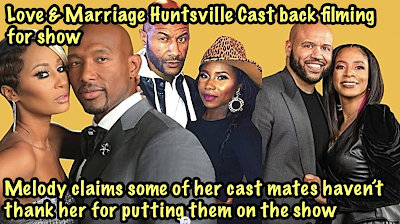 So, I wanted to talk today about Love & Marriage Huntsville, because they are currently filming for the upcoming season.

I also want to talk about how Melody threw shade at LaTisha Scott for wanting to be like her.  I don't know if y'all remember but season one reunion of #LAMH, Kimmie called Melody bougie.  And a lot of fans including Melody herself, seem to think that LaTisha is coping Melody in a way by trying to walk in her footsteps by taking photoshoots and doing speaking engagements.

LaTisha however denied that she is trying to be like Melody and says a lot of what she does on the show is just for the show, it's not her real life.

And I almost feel Melody making that statement is like a in your face type of thing, like a I made you type of thing, and I really don't like it. But I don't know, what do y'all feel about Melody saying that.  Am I reading too much into it.

And I've stated before that Melody moved to Atlanta when she filed for divorce from her husband Martell Holt.  It's listed in her divorce papers and she has made several social media posts alluding to the fact that she is living in Atlanta.  But since filming has started back for the show sis has moved back to Huntsville and she did confirm that no one would be on the show without her approval.

My Marriage Is My Testimony To Help You

How To Be A Good Wife To Your Husband

Read About My Personal Marriage Testimony

Encouragment For Wives From Lori Schumaker